Carol and I get to work early, it just kinda naturally happens. Today we arrived about 7:10, and saw a strange sight on the edge of the parking lot: A 3-foot tall, purple cup.

We had no idea what it was, and there were two rabbits looking at it with the same puzzled expression we had. So of course, we had to go check it out.

Turns out, the cup was part of a promotion McDonald's is running. They scattered these cups around in various spots, and whoever found one and brought it to the nearest McDonald's would win free McCafe smoothies for a year! 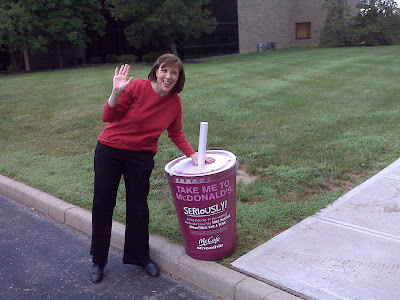 Seriously!  As the cup says.

There was a packet with the cup containing a t-shirt and instructions for the manager at McDonald's.  We tossed the cup into the backseat of Carol's car and boogied on down to the Hebron McDonald's.  We were getting some strange looks from the people in the McD's lot as we were walking in with it, but the workers all knew what was up and congratulated us on the win.

They took a picture of us with the cup, and had us fill out some paperwork, and said we would be receiving cards in the mail for one free smoothie a week for the next 52 weeks!  Awesome! 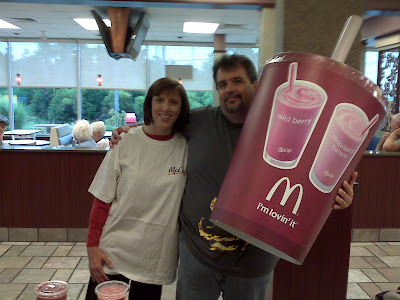